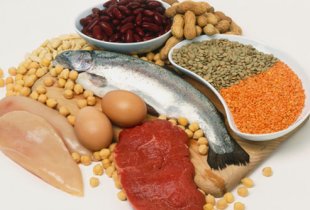 I’m a HUGE proponent of getting a lot of protein in the diet, and it’s not all about building huge, beefy muscles (although it helps a lot if that’s what you’re going for). Put plain and simply, protein is the “leanness” nutrient. It helps pack on toned-up, rock hard new muscle, preserves the muscle that the body (and you) busted its ass to build up, and elevates the body’s metabolism, burning extra calories than normal and shredding off nasty body fat/cellulite. 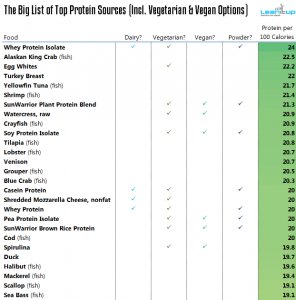 Protein is able to put the body’s metabolism into hyperdrive because it’s thermogenic. Most people have heard, at some point or another, that eating celery actually has “negative calories” because the body burns off more calories digesting the celery than it does eating it (it’s true by the way, if you were curious). That’s thermogenics.

It’s basically a term used to describe the amount of calories that the body burns by biting, chewing, digesting, swallowing, metabolizing, and storing food. It also raises the body’s metabolism and core temperature.

With that in mind, here’s your full, go-to compendium of the top protein sources — based on grams of protein per 100 calories — including the best plant-based protein options for vegetarians, vegans

How To Make A Muscle Building Protein Shake